To mark today's 15th anniversary of the Legion's defense of and the Mexican forces multiple assaults on the Hacienda de la Trinidad, known to history as The Battle of Camerone, I am happy to post this new battle report, of a very recent refight of the scenario, courtesy of my good friend Nick Stern.

These are the same excellent rules used for the first play-test posted on this blog soon after the 149th Anniversary of the battle. We used them to great effect again on April 30th, 2013 for our big commemorative game on the 150th Anniversary. Since then Nick used them in 2014 for a similar game at his home in the South Bay (here's a handy LINK to that AAR for anyone who wants to check it out).  Also, in case anyone is interested, here's a LINK to our thoughts on the rules when Michael was still making adustments to them, before running his very impressive game at the 2012 Historicon which earned him the "Best of Show Game Master" award. Many thanks to Rich & Michael for sharing their rules with us back then and to Nick for allowing me to post this new Battle Report...

The only thing left to say is:

Opposed to an entire army
Its mass crushed them
Life rather than courage
Abandoned these French soldiers
In Camerone on April 30, 1863.

We had six players, two French and four Mexicans. One Mexican player had played the game before, the rest had not. We began the game with the French inside the hacienda with the gates barricaded. There were six Mexican snipers on the second floor, otherwise all the other Mexican forces started 24” from the walls of the hacienda.

The French took the novel approach of not defending the gates or the breach and instead positioned themselves in the two sheds on the west wall between the gates, in the stable and in one of the enclosures on the east wall facing the breach. The remainder of their force, about half, were positioned in the lower floor of the hacienda, which was Danjou’s headquarters.

The dismounted Mexican cavalry came on in four twenty man companies, two from the west, heading straight for the gates, one from the south, heading for the breach and one from the east, heading for the undefended wall on that side. On the first turn the French were able to kill four of the Mexican snipers during their fire phase and killed the other two in hand to hand combat for the loss of one Legionnaire killed.

In the subsequent two turns the dismounted Mexican cavalry, unmolested by French fire, were able to dismantle the barricades barring the gates and the breach in preparation for an all out assault. 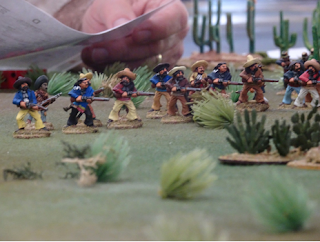 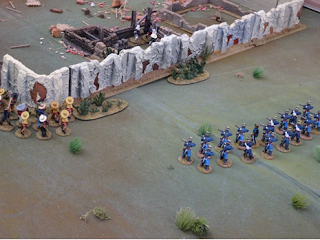 On the fourth turn the Veracruz battalion arrived and its five companies distributed themselves on the east and south sides of the hacienda. At the same time the dismounted cavalry companies entered the courtyard. For this turn and the next, the French strategy seemed to be working as the Mexican companies took heavy casualties from French fire.

The French expected the Mexicans to break, but they hadn’t read the rules’ fine print: No Mexican Straggling Inside the Hacienda! From now on full strength Mexican units continued to arrive through the gates and the breach. 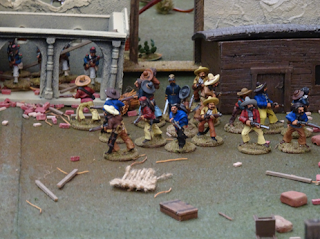 Still, things weren’t going too badly for the French. The Mexicans seemed reluctant to melee the French (as historically) and their musket fire against the French in cover meant they only hit on a “6” with a fifty percent chance of the targeted Legionnaire being saved.

Unfortunately for the French, one of their commanders had a nasty habit of rolling “6” on the Fate Table, which resulted in dead, not wounded, Legionnaires. Also unfortunate, at the beginning of turn Seven, French fire effect was halved due to low ammunition. At this point the French decided to play a very defensive game and backed off from the windows and doors, not allowing the Mexicans a shot in, and waited for the Mexicans to come in after them. 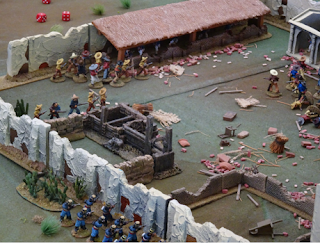 The Mexicans methodically attacked, first, the stable and, next, the shed nearest the stable, firing and fighting hand to hand, losing three or more of their men for every Legionnaire killed, wounded or captured. 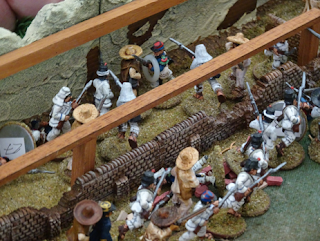 Things continued in this way until turn twelve, when I reminded the Mexican players that every unit in contact with the hacienda could attempt to start a fire by throwing flaming material through an open door or window.

I allowed one attempt per unit per turn.

They needed to roll doubles on two dice and the first Mexican player scored consecutive doubles on his first two attempts.

This started fires at the door on the north facing side of the hacienda and the window on the second story on the east side. I then gave the defenders a chance to put out the fire by rolling off against the Mexican player who had started the fire and the Legion player lost both rolls. 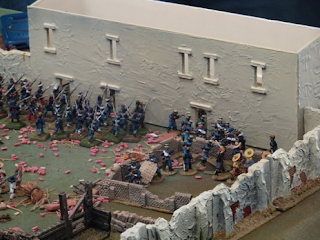 At this point the Legion players still had a good half of their strength in the hacienda and, after two further turns of successfully holding the three doors facing the courtyard against Mexican attacks (I visualized Pvt. Henry Hook in the flaming hospital in the movie Zulu) the Legion players finally acted audaciously and charged out of the burning building on turn fifteen!

There ensued a terrific melee, during which a further ten Legionnaires were killed or wounded and captured, but they took down three or four Mexicans for each of their own. 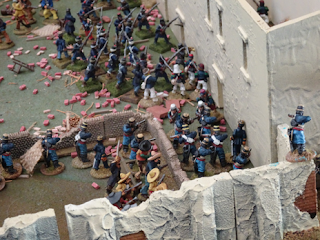 We called the game at the end of turn fifteen. There were still nineteen unwounded Legionnaires, including Lieutenants Villain and Maudet, Sergeant Major Tonel and Sergeant Palmaert, but they were now out in the open with no cover and out of ammunition. I am sure they would have taken another forty or sixty Mexican down had the fight continued. As it was, the final death toll for the Mexicans was 110. It would have been more had the French players defended the gates and the breach instead of allowing full strength Mexican units to enter the courtyard.

Here are a few more pics from the start of the game... 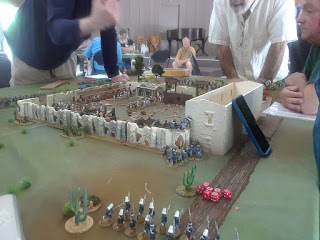 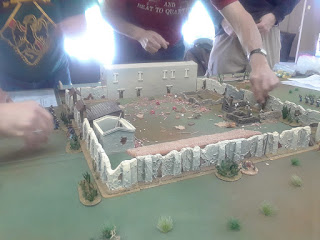 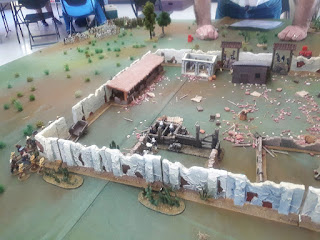 Thanks once more to Nick for putting on the game and allowing me to
post it here, and also to Rich Hasenauer and Michael Montemarano for
penning "NOT MEN BUT DEMONS!" - a great set of Camerone rules!