This diagram is taken from an article in the May 1999 issue #600 of Kepi Blanc (the magazine of the FFL). The overall layout and design of the compound is somewhat inaccurate (the compound was square, not a narrow rectangle, the main hacienda building was 2 stories high and had a door near the Western end which the Legion used to occupy that portion) but I really like the imagining of the ceramic tile gateway ROOFTOPS. 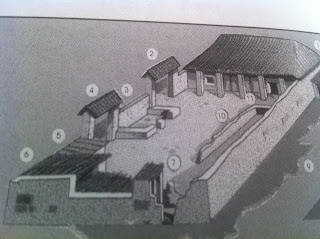 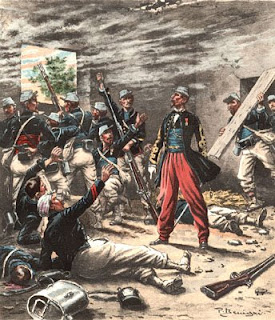 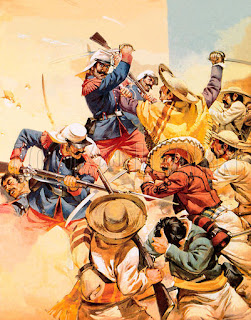 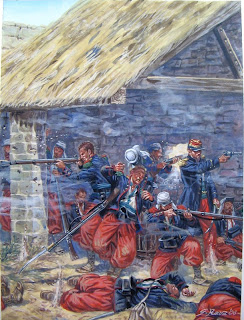 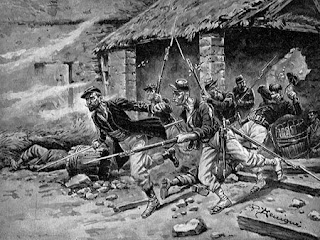 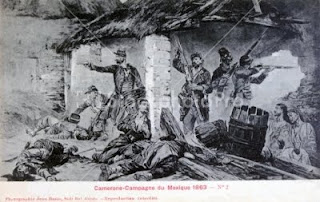 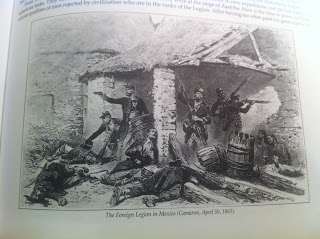 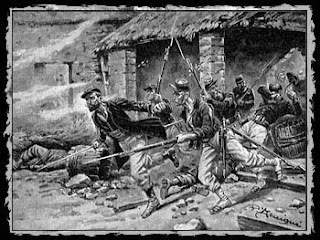 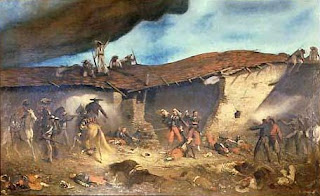 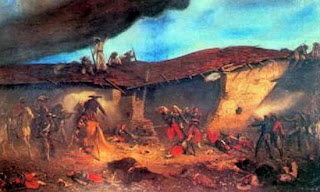 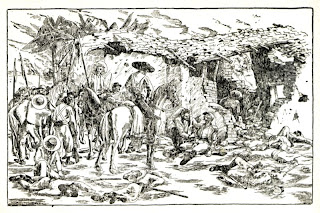 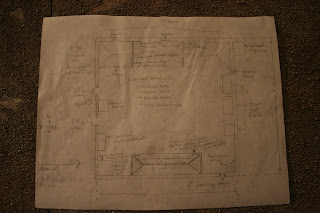 This is the centerpiece of the project, all based on a single piece of roughly 30” square board (plywood or Masonite or whatever else you use). It consists of:

(1) a large 2-story Spanish-style Mexican HACIENDA building with a red ceramic tile roof. The walls of the hacienda extend 2’ (in real life, not in scale!) above the height of the compound walls. The hacienda building stretches all the way from the west wall of the compound to the east wall. The INTERIOR should have a simple finish and the building needs a removable floor for the second story/ceiling for the first story.

The main floor is split into several rooms, the one at the WEST END of the building was occupied and defended by Legionnaires for several hours, during which they fought off attacks launched through a doorway that connected it to the ground floor room to the East, which was occupied by Mexicans. There was a DOORWAY in the ground floor that led out through the Northern wall of the compound, which is how the Mexicans gained entry to the building from outside the walls. There were also WINDOWS throughout the Hacienda on its interior walls facing the courtyard, and windows on the exterior wall up on the 2nd floor only. The 2nd story of the hacienda was divided into several rooms all of which were occupied by Mexicans. The STAIRCASE was located somewhere in eastern portion of the building;

(2) a large & somewhat decrepit BARN with a thatch-roof held up by several wooden posts/pillars with low brick walls which have become even lower thanks to bricks being scavenged for use elsewhere;

(3) the COMPOUND WALLS -- 30” square in 28mm scale size -- with a pair of gateways at the center of the west wall and a narrow (just wide enough for one man to slip through) pre-existing BREACH in the south wall, close to the south-east corner;

NOTE: the hacienda building and the compound walls were made of WHITENED LIMESTONE. I don’t know whether the stones were more rough-hewn in shape or all chiseled into more standardized brick-like sizes and shapes, or if the answer lies somewhere in between, possibly with a mix of rectangular sizes (as can often seen in limestone walls and buildings). I have a lot of confidence in your artistic judgment and leave the fine details to you.

(4) several SHEDS, LEAN-TOS and “HANGERS” made from a mix of wood and stone, with roofs made from a mix of thatch, wood and maybe even tile, all in various degrees of disrepair, located at different spots along the interior compound walls, and another similar shed housing a pile of wood, built up against the exterior of the east wall very close to the north-east corner (the shed for the exterior is the only one that has to be built on a separate base, the interior sheds can be built permanently into the model);

(5) DEBRIS scattered throughout the compound courtyard consisting of –MILDEWED MATS, -SHATTERED LUMBER and –DISCARDED red clay BRICKS and pieces of limestone (I think this should all be built into the ground cover of the model;

(6) several DEBRIS PILES stacked together by the Legionnaire defenders and used to block the pair of gateways and the pre-existing breach (these should be mounted on thin bases of their own which can fit into the respective open spaces);

(7) FIRE-DAMAGED REPLACEMENT ROOFS for the Hacienda building and the stable (during the battle the Mexicans tried to burn and smoke the Legion out of their defensive positions).

Four worn-out and disused Mexican village buildings built in similar style to the Hacienda but of much more modest size and finish, they have lain abandoned for some years.

4 or 5 currently occupied but very modest Mexican Indian dwellings, of different style than the above “Spanish”-style buildings -- no tiles for the roofs, no whitened walls, these use something like woven tree branches and/or bark plus maybe some dirt and dry mud for walls, and thatch for roofs.

Built in similar style and out of the same materials as the Hacienda (but not as big, just a medium-size building), a Mexican 2-story Spanish style building, this one more upscale than the Hacienda back when both were in their heyday. The inn has at least one, perhaps several terraces on the second floor. Later in the battle this is where the Mexicans set up their field hospital to treat both French and Mexican wounded, so it should have a removable floor for the second story and be roughly finished inside.

Back before the previous war (the “War of the Reform”, which was a Mexican civil war that preceded the French intervention) this area was home to profitable agriculture and animal husbandry. The dam was used to control water brought from a nearby river via a manmade waterway, and disperse it to the neighboring farms for irrigation of fields and watering of livestock. But since the road from the coast to Mexico City runs through the area, as the wars dragged on and fighting and pillaging became incessant, the local farms stopped operating, leaving the manmade waterway to largely dry up and become overgrown in some places. But the dam still sat there. I figure it’s made mostly of rocks from the nearby river, together with packed dirt, wide enough at the top for a man or even a drought animal to walk across from one side to the other, with sloping ramps at each side to enable this (though one or both ramps may now be somewhat dilapidated or damaged). When it was in active use maybe there was a simple wooden railing made from split posts lining one or both edges, but by now most of that wood has been stolen away or fallen apart, but there might still be a few pieces of it standing up.

The dam is the only tricky piece in terms of how to size and base it, since everything else is either a building or a collection of buildings linked together with walls. The good thing is since the water has mostly dried up from lack of maintenance, it doesn’t have to be too big. If the dam itself is 1.5”-2” wide x 6”-8” long it will just need a hollow, dry channel dug-out of the earth (and perhaps overgrown with weeds, grass, etc.) on one side, and the start of several smaller such channels on the other side, which used to be for spreading the river water out amongst the locals but have since also dried up from lack of maintenance. So something like 8” x 8” altogether, with the dam and the now unused manmade waterways on both sides.

I am including a detailed diagram of the Hacienda compound with exact locations for the Hacienda, the stable, the various sheds, the pair of gateways and the pre-existing breach.

The walls of the compound should show evidence of deterioration and also some pock-marks from bullets. But the written recollections of one surviving Legion defender recall that late in the battle, after fighting for many hours, the walls were blinding white in the reflection of the hot tropical sun, so despite whatever decay the buildings and walls may have suffered to their finish, they were still substantially WHITE (the natural color of limestone is pretty pale itself, so I guess stones showing through the white finish didn’t take away that much from the overall “white” effect). The other important thing to remember is that the walls remained substantial enough for a mere 49 Legionnaires to defend the compound for 10 hours against an onslaught of nearly 2,000 attackers. Since the Mexicans had no artillery or siege engineers present, it was simply impossible for them to do much damage to the structure of the compound.

I didn't plan to start "blogging" here for some time but right after I created this blog I realized its existence would show up on my "Maiwand Day" blog, so it might get some visitors, which means I should at least explain what it WILL become when I get around to it.
I hope to build a Battle of Camerone terrain layout in time to refight the 1863 battle on the day of its 150th anniversary -- April 30th, 2013 -- the same way some friends and I refought Maiwand on the day of its 130th anniversary nearly a year ago on this past July 27th, 2010.
Right now I am trying to nail down all the elements needed for the battlefield, in particular the exact layout of the Hacienda de la Trinidad, its stable, sheds and outbuildings, as well as the decrepit village buildings nearby and the Indian village huts slightly further down the road, as well as the "damaged" and out of use dam and abandoned inn both of which were located close enough to Camerone to house the field hospital set up and used by the Mexican forces throughout the battle.
From time to time I will post updates on any progress I make in these preliminary steps but my guess is that it will be some time yet before I have anything visual to show for my efforts. There is more than a year and a half to go before "Camerone Day +150" comes to pass, so thankfully I have some time yet to get things done.
If you're a fan of La Legion Etrangere, or Mexico, or 28mm wargaming, wish me luck!
Posted by Mad Guru at 2:01 AM No comments: