Today marks the 151st anniversary of the battle of Camerone.

I tried to organize a commemorative wargame, but unfortunately it did not work out.  Everyone else had other things to do, which is a pity.  I will wear my t-shirt, with a piece of art and the name and date of the battle on the front, and "NOT MEN, BUT DEMONS!" written across the back.  I guess, as my children would say, I am just a history geek.

There has not been much activity on this blog over the past year.  It's been a bit of a rough year for me, with my dad passing away in December of 2013, and some very tumultuous doings on a particular work project.  The time I did have to spend on the hobby was all spent on prepping terrain for my 1879 Second Afghan War battle of Charasiab layout, which is set in a very terrain-intense environment.  I've been working on the various elements since the end of 2011, and hope to have it all done in time for the next anniverary this coming October 6th, by which time I will have been working on it, on and off, for about three years.

If anyone hasn't seen it and is interested, here's a LINK to what I've done so far, which does not yet include several major elements, including most importantly a pair of river terrain boards, which I hope to begin building some time soon...

Meanwhile, I do want to add something re: Camerone to this post, so...

Here's a list of what I consider to be the most important three books I used as resources for researching preparing my terrain and scenario.

For those of you very familiar with the battle and the literature dedicated to it, this list will come as no surprise, but if you're more of a newcomer to the subject, I hope it will be of some use... 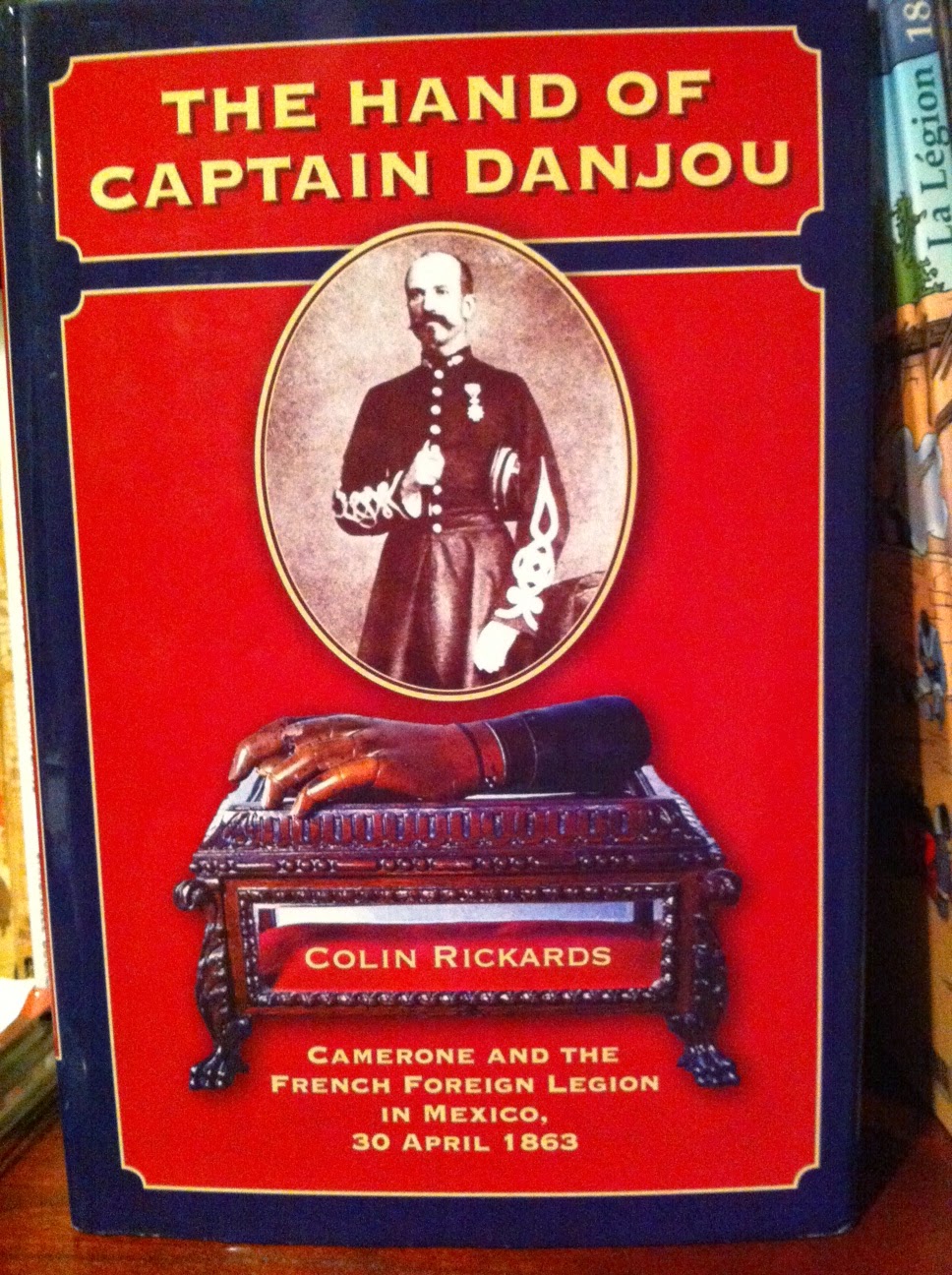 THE HAND OF CAPTAIN DANJOU, CAMERONE AND THE FRENCH FOREIGN LEGION IN MEXICO by Colin Rickards, Crowood Press, Ltd., 2005, 480 pp.

This is a very valuable book for anyone interested in the nitty-gritty details of the battle, as well as in the overall history of the "Mexican Adventure" campaign and the Foreign Regiment's participation in it (as the Legion was known at the time).  For my purposes it was extremely valuable, since it contains just about all the existing written reminiscences of particpants in the actual battle, as well as contemporary descriptions of the Hacienda de la Trinidad and the surrounding derelict village of el Camaron. When it was first published, this was by far the best book in English on the battle, containing the most details.  However I would have to say that compared to "Hand of Danjou" it comes in second place.  It's a smaller book with more modest goals, dealing only with the battle of Camerone from start to finish, but "Hand of Danjou" does that just as well if not better, places the battle into the context of the overall campaign, and also deals with the historiography of how the "legend" of Camerone developed inside the Legion over the years following the battle, and was later ensconced as "official" history.  Still, as a completist, I'm happy to have the Ryan book on my shelf and would not want to part with it. MAC COY, CAMERONE, written by J.P. Gourmelen, illustrated by A.H. Palacios, Dargaud, 1983.  Silly as it may at first seem, the French comicbook pictured above, one of a large series devoted to the adventures of a U.S. Cavalry officer named "Mac Coy" (who looks suspiciously like Robert Redford around the time of "Butch Cassidy and the Sundance Kid" and "Jeremiah Johnson", makes my list, because of the artist's impressive rendering of the terrain and buildings surrounding the Hacienda compound, as well as the compound itself.  It also provides a pretty accurate visual depiction of the progress of action as the battle proceeds from start to finish.  I've been told that copies exist in English but I've never seen one myself, mine is in French, but since I bought it for the art that fills every page, that is no problem.

NOT SHOWN ABOVE but also very valuable -- if you do read French -- is Pierre Sergent's "CAMERONE, THE FOREIGN LEGION'S HEROIC CAMPAIGN IN MEXICO", Fayard, 1980, 480 pp.  For many years this was the authoritative account of the battle, and it includes several good maps and diagrams of the area surrounding the hacienda compound and the compound itself.  Unfortunately I've never seen or heard of this book being available in English as opposed to French.

I hope to return soon with a new post devoted to the CAMERONE DAY game my good friend Nick Stern has organized up in his Northern California neck of the woods, which I trust will go splendidly well, as pretty much all of his games do.  Until then, I can only echo the words of Colonel Milan by saying:


NOT MEN, BUT DEMONS!