We started at 10:00am... but not really.  Tweeked some things on the table, gave the Hand of Danjou a going over with some fine grain sandpaper and a second coat of wood stain, finished up dry-brushing the handful of Mexican troops whose bases were not quite finished... and then had lunch!

We actually kicked off the game for real closer to 3:00pm, and it moved along quite well.  The game reached its absolute conclusion at around 11:30pm, so if you subtract an hour for dinner and a half-hour for combined other pauses and delays, means it took about 7 hours to play from start to finish.

We had a decent size group of players.

1.  Ethan (me)
2.  Skylar (my16 year-old son)
3.  Sarah (my 10 year-old daughter)
4.  Kainoa (a 10 year-old friend of Sarah's who plays Warhammer 40K, paints his own minis and builds his own terrain, and really wanted to participate in Camerone Day)
5.  Odin (who participated in the original Maiwand Day game)

For the Mexican Republican forces we had...

6.  Phil Chiu (gaming buddy of Nick Stern from Northern California who recently moved to Southern California and is also a Maximillian Intervention gamer)
7.  Myles (my brother)
8.  Isabella (my 13 year-old daughter)
9.  Danny Riordan (who participated in the original Maiwand Day game)
10 & 11. R.J. & Rod Galati - a pair of gaming brothers who came up from their homes in Orange County

And last but farthest from least -- at lucky number 13 -- our all-important GAME MASTER, Nick Stern.

Incredible as it may seem, without any kind of manipulation or planning, the LAST MAN STANDING ON THE FRENCH SIDE... was Captain Danjou!  After charging out into the courtyard with a last handful of men, and fighting for several turns, he found himself alone, facing approximately 40 Mexicans in hand-to-hand combat.  He killed the first one by rolling a 6 vs. the Mexican player's 1, then sadly fell to the second by rolling a 1 to his opponent's 4.  Unlike a group of wounded Legionnaires who had given up a few turns earlier, Danjou could not bring himself to surrender.

I'll have lots more pics, and some more AAR details as time proceeds, but I have to say, it was a great day and night of gaming.  I think everyone here had a very fun time, and that included Mexican and French food and drink, beautiful miniatures on nice terrain, and terrific company.  I really want to thank everyone who made it possible, including my wife, who as usual was a very gracious and generous hostess, and Chris The Model Maker, without whose custom-made Camerone buildings, the game would not have been the same.  I'd also like to thank everyone who came to play, especially Nick Stern and Phil Chiu, whose combined miniature armies made it possible to more than just look at my Camerone buildings, which though they are quite nice indeed, still require appropriate troops to fight over them in order to be worth while!  Thanks guys!

Aftermath of the battle on the tabletop: 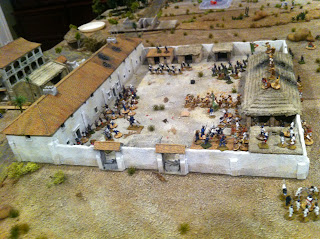 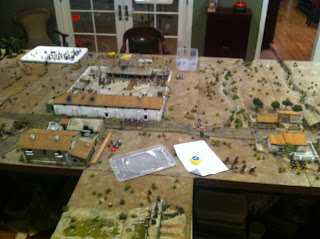 CLICK HERE FOR THE FIRST BATCH OF PHOTOS showing progress of the game...