There's a lot of excitement here at my place -- and it's not because of the Superbowl later today, since as a Giants & Patriots fan, with a soft spot for the Green Bay Packers, as well as the Chargers -- who I occasionally drive 2.5 hours South to see play in San Diego -- I couldn't care much less about either the Baltimore Ravens or the San Francisco 49ers!  I will watch, and hope for a good game, but what's got me excited is I just received the first pictures of one of the "scenic" components of this project from Chris The Model Maker/AKA: Chris Riordan of Ontario, Canada, and needless to say, they look great!

I think Chris's model of the decrepit, unmaintained DAM located not far from the Hacienda compound at the center of the battle of Camerone, turned out fantastic.

I described the dam in an email to Chris, same as in one of my first posts to this blog --

V. Abandoned dam
Back before the previous war (the “War of the Reform”, which was a Mexican civil war that preceded the French intervention) this area was home to profitable agriculture and animal husbandry. The dam was used to control water brought from a nearby river via a manmade waterway, and disperse it to the neighboring farms for irrigation of fields and watering of livestock. But since the road from the coast to Mexico City runs through the area, as the wars dragged on and fighting and pillaging became incessant, the local farms stopped operating, leaving the manmade waterway to largely dry up and become overgrown in some places. But the dam still sat there. I figure it’s made mostly of rocks from the nearby river, together with packed dirt, wide enough at the top for a man or even a drought animal to walk across from one side to the other, with sloping ramps at each side to enable this (though one or both ramps may now be somewhat dilapidated or damaged). When it was in active use maybe there was a simple wooden railing made from split posts lining one or both edges, but by now most of that wood has been stolen away or fallen apart, but there might still be a few pieces of it standing up.
The dam is the only tricky piece in terms of how to size and base it, since everything else is either a building or a collection of buildings linked together with walls. The good thing is since the water has mostly dried up from lack of maintenance, it doesn’t have to be too big. If the dam itself is 1.5”-2” wide x 6”-8” long it will just need a hollow, dry channel dug-out of the earth (and perhaps overgrown with weeds, grass, etc.) on one side, and the start of several smaller such channels on the other side, which used to be for spreading the river water out amongst the locals but have since also dried up from lack of maintenance. So something like 8” x 8” altogether, with the dam and the now unused manmade waterways on both sides.


-- but Chris asked for a picture, so I spent some time struggling to produce a sketch, which forced me to think more about how the canal-fed irrigation system tied in to the dam might have actually worked.  I did some research and did my best with the sketch, which was still somewhat "sketchy" -- but I think Chris turned it into something great!

So without further ado, please feast your eyes... 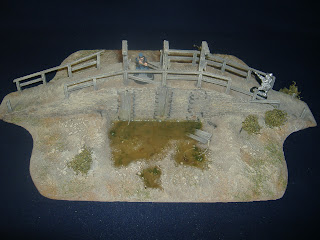 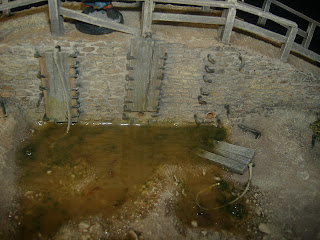 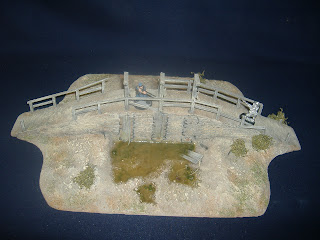 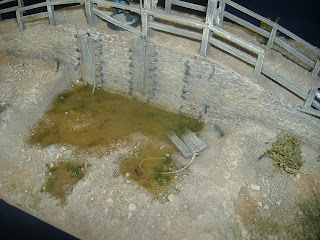 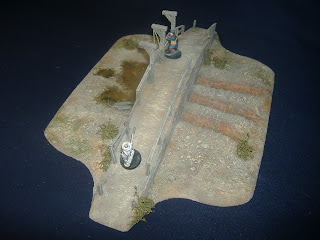 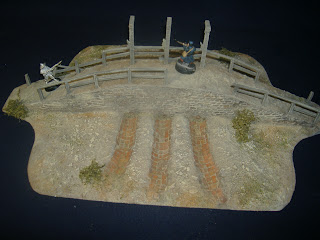